Why Re-Visiting Your Old Photographs is a Good Idea

In an industry like photography, it’s easy to get swept along with the notion that new is better and to forget the old. New technology, new ideas and trends in imagery are constantly urging us to look forward, which in many cases can have a positive affect in driving us to create new and exciting work. However, if you’re anything like me, then you’ve got hard drives filled with images from years gone by that likely won’t ever see the light of day again, well hopefully this article might make you change your mind and give some of those images a new life.

As a photographer, one of the greatest challenges that I feel I face is the expectancy to be regularly producing new content that is better than the last set of images that I took. That challenge to be outwardly progressing with your work can be draining and it can require a lot of effort, time and money to trump your previous project.

However, for a recent portrait article, I wanted to submit a selection of portraits that I’d taken about 18 months previously. There was an inconsistency in one of the images, so I opened it up in Lightroom and started playing around. After about 10 minutes, I realised that having made a few simple changes, the image had come alive!

A shot that I had deemed perfectly decent now looked flat and boring alongside it’s re-edited brother. So I went ahead and re-edited the whole set and within an hour or so, I had a fresh set of images that I was excited about showing people. Just like I experienced, you may well have shots that you didn’t necessarily deem worthy of your attention waiting to be brought back to life. It may be that the original shoot had a specific purpose that those images didn’t fit, so they were left out.

It may be that the picture editor liked a certain few, but that your favourites got left out and looking back, you can appreciate the value of those shots and see that they are worth spending time with.

In the quest to keep generating images to show the wider world, it’s important that you remember that what’s old to you, may still be new to those on the outside. It’s doesn’t really matter when the image was taken, if it’s a ‘good’ image, a well composed and engaging shot, then it’s worthy of being seen.

Don’t be afraid of publishing shots that were taken a while ago, you might need to embellish your portfolio, or find another few images for your book or stock photography catalogue and have the shots waiting for your in your image library. 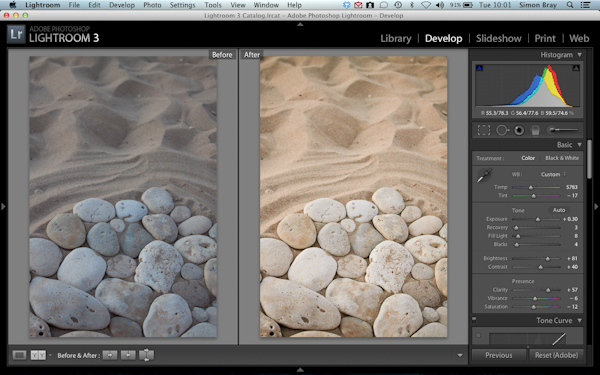 As photographers, we’re constantly engaging with imagery, that of other photographers, artists and designers that educates and informs us. Some shots we see and we engage with, others we see and disregard. This subconscious education will inform the way in which we view our own work and over time, will enable us to see our previous work in a new way.

It may be, that whilst looking through your older images, you find shots that you view and engage with differently than before. Your understanding of what’s important in a photograph allows you to appreciate the image in a way which you couldn’t see before and offers you the chance to draw new life from the shot.

It may well be the case that since you took some of the shots in your image library, you’ve updated your processing software. You may well have taken the plunge to upgrade by investing in some high end editing suite or you may have just downloaded the new version of Lightroom or Photoshop. If this is the case, then you’ll now have a vast array of tools and options at your fingertips that enable you to develop your images in a way that wasn’t possible when you previously edited the images. In a similar way, having spent more time with processing software, you will have developed a great set of skills and techniques for editing your images. Each time you edit and experiment, you are learning the ways in which best to process your shots and you’ll undoubtedly get better over time.

Your understanding of what an image requires, which areas need to be brought out and how to effectively enhance those areas will have greatly increased, so upon revisiting a shot, you’ll have a far better perception of how to edit the shot than first time around. Obviously it’s good to be taking photographs regularly and challenging yourself with new projects, but there is a lot to be said for looking back over the work from previous shoots and spending time with photographs that you may well now see in a different light.

Over time, things change. Even over what you might deem a relatively short time, physical spaces evolve, people change, fashions and habits develop and all the photographs that you took in the past were documenting those things. It’s important that these images, capturing moments in time that have passed, aren’t forgotten.

They might not seem relevant right now, but they need to be preserved for future generations. The meaning of an image will also change as the spaces and people involved change, you’ll find that some images develop significance over time that you just hadn’t anticipated. You may want to start a project based upon the images that you’ve revisited. A simple idea might be revisiting the location that an image was taken. This will allow you to not only revisit the image, but also the original location in order to photograph it again and document the developments and changes. This is a notion which I would encourage photographers to undertake regularly anyway.

Returning to appreciate the evolution of a location is important for photographers to understand what it is about a location that makes it engaging for the viewer. So now it’s your turn. Set aside an afternoon or two and have a look through some of your old photo projects. It may be that you find whole projects that you want to re-edit and publish, or you may only find a handful of shots that you want to work on, but either way, it can be an extremely exciting and interesting project to have a go at. Bringing new life to old images has brought me great joy over the years and hopefully it’ll do the same for you! Photos and information by Simon Bray